History of the Screaming Eagles

History of the Screaming Eagles

The history of the 101st Airborne Division extends back over 26 years to August 16, 1942. On that date the Division was activated at Camp Claiborne, LA.

“The 101st Airborne Division has no history, but it has a rendezvous with destiny,” said Gen. Lee

By October, the new unit was fully organized, and it moved to Fort Bragg, N.C., to merge with its parachute regiment, the 502nd Inf.

The Division’s “Screaming Eagle” shoulder patch had been adopted while the 101st was an infantry division of the Army Reserve. It was modeled after Old Abe, the Division’s first mascot.

The jumpers and glidermen trained vigorously throughout the fall and winter of 1942. They were joined the following summer by the 506th Parachute Infantry Regiment, which had completed training at Camp Toccoa, GA., in the shadow of Currahee Mountain.

The jumpers and glidermen trained vigorously throughout the fall and W.W.II

After landing at Liverpool, England, on Sept. 15, 1643, the Division moved south for ten months of additional training. The 501st Regiment was attached that winter, rounding out the Division that was about to fight its way to glory in World War II.

The first rendezvous was the Normandy Invasion.

On the evening of June 4, 1944, the Screaming Eagles ate steak and ice cream dinner while preparing for their first combat jump.
Gen. Eisenhower visited them the next day to wish them well. On D-Day, June 6, they jumped 6,600 strong, yelling “Bill Lee,” in honor of their former commanding general, who had suffered a heart attack in England. Major General Maxwell D. Taylor had assumed command in April.

Plans called for the 82nd and the 101st Airborne Divisions to land in the eastern half of the Cotentin Peninsula between St. Mere-Eglise and Carentan, to establish a beachhead from which VII Corps would push west and north to capture Cherbourg.
Flight formations were broken as the aircraft maneuvered to avoid enemy flak.

By the time the command “Stand in the Door” was given, the planes were so dispersed that the drop came down in a 25 by 15 mile rectangle. Mixed groups were forced to band together to continue the mission.

“I landed in a swamp,” recalls MSG. James S. McCoy, who made the Normandy jump as a machine-gunner. “It wasn’t until the next morning that I found a group of fellow paratroopers.”

Despite chaos created by dispersion, the highly trained airborne soldiers of the 101st succeeded in capturing the important exits behind the beach as well as the locks on the Douve River north of Carentan.

The city itself was taken on June 12, following a bitter five-day battle.

“You hit the ground running toward the enemy,” Gen Taylor later told his troops. “You have beaten him on his own ground, and you can beat him on any ground.”

Of the 13,000 paratroopers and glider- men who participated in D-Day, 4,670 became casualties.

The Division returned to England, replaced men and equipment, and conducted training to overcome mistakes made in the Normandy jump.

The second rendezvous took place in Holland, where the 101st, 82nd and the British 1st Airborne Division made a daylight jump on Sept. 17, 1944.

This time the pilots held a tight formation and the 101st made the most successful jump ever accomplished in combat or training.
The paratroopers secured a vital supply route from Eindover to Arnheim for the British 2nd Army.

When the Screaming Eagles moved to Mourmelon Le Grand, France, 72 days later, their rendezvous was imminent.

The Germans had been driven back nearly to their own border and their resistance was stiffening. Hitler’s counterattack against the Ardennes Front threatened to split the Allied Forces.

On December 18, orders came to the 101st from VIII Corps: “Hold Bastogne.”

Paratroopers maintain security while taking a break during house to house search in Holland. 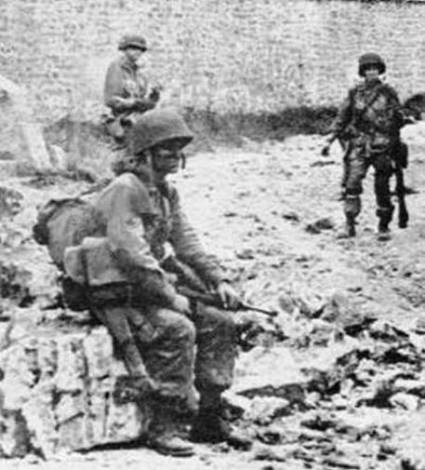 He ordered the 501st Inf. to move east and clear the way to Longvilly. Enroute, the airborne infantrymen met a larger German force.

The enemy mistook this to be a major offensive and stopped its advance, giving the rest of the Screaming Eagles additional time to organize positions at the French village of Bastogne
Roads out of the town were jammed with vehicles from withdrawing units.

A military policeman directing traffic at an intersection, when asked what the situation was, answered: “I don’t know, Everyone else is leaving and the 101st is coming in.”
The battle toughened as the Screaming Eagles were surrounded by eight enemy divisions. Trench foot and frozen limbs matched casualties from enemy bombardments.
“Artillery poured in on us like rain”, recalls Brigadier General Richard J. Allen, who was there as a battalion executive officer. “But by then we were experienced troops and knew a lot of tricks.”

Ammunition, food and medical supplies ran low, but the battered paratroopers held the frozen ground. Artillerymen were limited to ten rounds a day as they watched the enemy swarm to their front, forming easy targets.

When the Germans gave Gen. McAuliffe the ultimatum of surrender or be annihilated, he gave his famous one-word reply: “Nuts.” 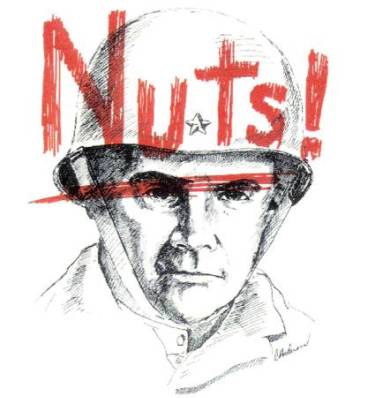 The siege ended eight days later with the arrival of the 4th Armored Division.
For its gallant defense the Division was presented the Distinguished Unit Citation by Gen. Eisenhower, in the name of the President. This was the first time an entire division had ever received this high award.

Ordered to the Ruhr in early April, then to southern Germany and finally back to France in August, the Division was deactivated after the defeat of Japan.

The Division’s fortunes fluctuated after World War II. It was reactivated and deactivated, as a training unit, three times in 11 years.

In 1956, at Ft. Campbell, KY., the Division finally regained it’s wings. It became the first Army division to be organized under “pentomic,” concept, a structure adopted by all infantry divisions in succeeding years.

It was called “pentomic” because the Division was organized on a five-sided basis designed to provide flexibility required by units fighting on an atomic battlefield.

The next few years saw the Screaming Eagles train hard and travel far. In major exercises from Alaska to Iran, in civil disturbances at Little Rock and Ole Miss, the best trained unit in the U.S. Army showed its professional skill, and it’s discipline.

Nine infantry battalions, four artillery battalions, an Engineer, Signal and Aviation battalion, and a squadron of Cavalry-all airborne-constituted the combat building blocks of this powerful organization. As in the former structure, the battalions retained the numerical designations and heritage of the famous Airborne units of World War II and Korea.