This is in response to your request for information in the 327th Airborne Infantry Guest Book concerning SFC Edward A. Birmingham. Yankee Jim forwarded your request to all Brothers on the roster.

My name is Roger Morris and I was a Squad Leader in SFC Birmingham’s Platoon at the time of his death. I later became Platoon Sergeant and Platoon Leader for the Platoon.

I was only in the Platoon for a short time before we lost him, but the situation being as it was in those days, we made quick and severe judgments of one’s capabilities and character and were seldom wrong due to the intensity of everyday life. As you can imagine, we had ample opportunity.

SFC Birmingham was a great leader; the respect and admiration he received from the entire Company was well deserved. He was above everything else a courageous warrior who cared deeply for the welfare of his soldiers. He ultimately sacrificed his life for his soldiers.

If you will bare with me I will tell you a little of the undying respect he holds amongst the surviving soldiers of his Platoon to this day and the honor we bestow upon his memory.

I own 100 acres in North Central, Florida in partnership with a close friend of Belgium Nationality who shares with me a deep feeling of gratitude to all service people who have fought our wars, especially those of the 101st Airborne Division. The property is 14 miles from the nearest highway, accessed by logging roads. It is completely off the grid and we generate our own power and water.

He and I have decided to build a tribute to those soldiers who lost their life while serving with Company C, 1st Battalion (Airborne), 1st Brigade, 101st Airborne Division during the period July 1967 – November 1968. That is also the time in which I served with the Company.

We purchased the property a little over one year ago and currently have over a mile of trails, two game meadows, game feeders and shooting stands, a small lake and a pond, a shooting range, four buildings, two covered RV’s and a pole barn. One of the buildings is a garage and a party/meeting room and the others are the cabins of myself, my brother and another man who also served with us during that time. My Belgium friend is in the process of also building a cabin. We also have a large traffic circle with a fire pit/picnic table and benches. There are approximately 10 acres around the main complex which has been landscaped and cleared to render a park like atmosphere.

The property has been named “Eagles Roost.”

All improvements, i.e., trails, roads, meadows/fields (which we plant in game seed), ponds/lakes, shooting range, buildings, etc. have been named after those who lost their lives during that time. Each have been identified and posted with a suitable marker with the Purple Heart and the soldier’s name (with the exception of the main entrance road into Eagles Roost, “John G. Gertch Way”, which is marked with the Medal of Honor. John Gertch was originally assigned to Company C, and was assigned to the Battalion Tiger Force when he lost his life. He holds a special place of honor though out the entire Battalion. 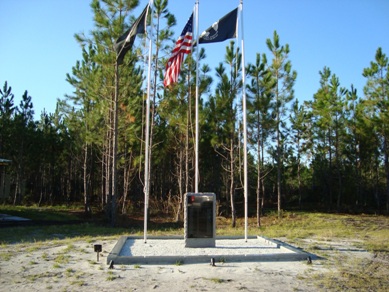 We have also erected a Monument to our fallen Brothers. The inscriptions are on a granite slab, attached to a granite stone. The monument sets on a concrete slab, outlined by marble runners, and filled with white marble gravel. The American Flag, 101st ABN Div Flag and the POW Flag fly behind the monument.
There are solar lights on the Monument and Flags.

The Monument has 46 names of those solders we lost during the time-frame
mentioned.

It is our intention, as I mentioned earlier, to continue naming trails and other improvements after those solders on the Monument.

We cleared and planted a game meadow last October and Christened it “Edward A. Birmingham Meadow.”

Eagles Roost has an abundance of wild game, i.e. bear, wild turkey, wild hogs, deer, panther, bobcat, raccoons, etc. We plant game fields and stock feeders for the game. We also have a well stocked pond which is relatively large. It is fed from a deep well with a spraying fountain and is named “Roger W. Overstreet Lake.” There are picnic tables around it and it is a great place to relax and watch the fish (and from time to time catch them).

In February 2011 and 2012 surviving members of Company C came to visit with their wives. There have also been other members of the Company drop in for a visit.

Eagles Roost was intended as a place where those members who served with us have a place to come visit, hunt, relax or just reflect and share in the company of their Brothers. Of course other members of the 101st Airborne, and in fact, all veterans and their families are always welcomed.

We will continue to improve upon the property. There will be more trails, game meadows, probably more ponds, and as we finish our cabins we will have guest bedrooms in which visitors can stay if they desire. Alternatively there are readily available motels along the highway.

Eagles Roost is a project that has taken on a life of its own, but one which we have enjoyed very much. We can’t devote our full time to it as I live most of my life in Europe (where I am now), my brother is in Tampa, Florida, my Belgium friend is running around the world managing his business, and my other friend lives in Kansas. However we get there as we can, and whoever is there goes to work to improve upon what we have. We started with nothing but brush and trees a year ago but it is a work in progress and will only get better as time goes on.

I apologize, this has been rather lengthy by necessity. I wanted to explain what we have and what we are doing.

You and your daughter in law are as welcome to visit and enjoy Eagles Roost as any of those we have served with.

Edward Birmingham’s memory and the memory of those other 45 Brothers on our Memorial share a very high honor from those who have known and served with them.

I sincerely regret the loss of your own son, and send my condolences to your daughter in law for the loss of her husband.

I also wish the very best to yourself and SFC Birmingham’s family and assure you that all of those who knew him share the loss of this courageous soldier.

I am very humbled and gratified to read your note and sense the effort and commitment you and others have made to your fallen troopers and their families. The kind of physical land memorial that you have developed is rare in my experience. I am very honored to have you take the time to write and I appreciate the detail and care that you devoted to writing your explanation. Any soldier who can express himself this well would have been highly valued regardless of mission. I sought guys like you for my LRSC Company when I was a battalion cdr.

However, I know that kind of thing is not why you wrote to me. There is another irreplaceable “thing” that I think you, my son, and Butch Birmingham sensed, lived and came to “be” in the minds of their comrades.

I am so very proud to have you write to me. My heartfelt respect and admiration for what you and your comrades are doing.

To tell you the truth we’ve kind of resisted publicizing Eagles Roost in the past. It was all word of mouth. Word of course has gotten out and a couple of the local papers have wanted to print it up. They can’t seem to understand that I’m not looking to have my name in print! I just tell them that everyone who needs to know, knows.

In fact we have had several Brothers visit the Roost and none of them knew what to expect until they got there and saw it. For awhile there was kind of a, “Don’t tell anyone, let them find out for themselves when they get here” kind of thing. But word does get out and now a lot of folks know what we’re doing.

Like I said in my email to LTC Rose, Eagles Roost is about veterans. I sent a copy of that email to Yankee Jim because I knew that a lot of our Brothers might be interested.

But to answer your questions, no I don’t have a write up other than what I sent to LTC Rose. As to WANTING something posted on the 327th Web Site, I’m of two minds: I want our Brothers to know about it but Eagles Roost is a very private enterprise that was never meant to be widely known except for those who would care and understand; like our Brothers on the Web and our fallen Brothers and their families. Eagles Roost is not for the generally public, therefore they don’t need to know. But on the other hand putting something on the Web would get the info out to those who do need to know. It’s kind of a catch 22 isn’t it?!

Confusing? I’m not sure I understand it myself except my feelings that those who want to remember or commemorate our fallen have ample opportunities to do so. Eagles Roost is for US. A place for Us to come together, remember and honor them. And actually the Memorial is not only about those who lost their lives in C 1/327 but is representative of all those who died during and since the War from injuries and illnesses. Many of the locals and workers who have been there have commented on that fact.

And it is not meant to be a place of grief, but a place of healing. Where we could come together and simply honor those Brothers in some simple way. We all sent our fallen Brothers home in ponchos and body bags, we didn’t place them in a casket, see them buried with a head stone and have a time of grief. I guess the Monument kind of did that for me and for the folks who have visited. Now we have something to look at and read the names, and remember them as they were. The good times, I find now after all these years, over-shadow the bad in the setting of Eagles Roost.