As for my 1/327th assignments in Vietnam, I arrived in-country and reported to Phan Rang 1 May 66 and went thru “P” training, joining C Co 1/327th on the Cambodian border at Nhon Cho, as 1st Plt Ldr. We moved to Cheo Reo and then to Dak To where the entire battalion was heavily engaged for 17 days in early June. 1st Plt suffered two KIA and six wounded on 8 June ’66, out of the total plt field strength of 17 men plus one attached medic (PFC Jim Dolinger), one attached FO from the C Co mortar plt. (Cpl Tommy Henley) and one attached Vietnamese scout dog handler that spoke little English. Those who gave their lives for their country that day were Plt Sgt. John Dixon, and SP/4 Allan Combs. WIA were the following; PFC Bernard (Slick) Clemons, SPC/4 Carmi Guyette, PFC Buchanan, PFC Clevenger, and PFC Jim Morales.

Shortly after that “Battle Of Tomourang”, I was promoted to Captain and reassigned to HHC as Rear Area CO for the next two months to prepare for and pass an IG inspection of our Phan Rang opns. I rejoined the Bn Fwd at Tuy Hoa as S-4 and remained in that slot thru May ’67.
After assisting the Bn movement by LST from Nha Trang to Duc Pho in I Corps, I went home to the states on extension leave and returned to assume command of Mighty ABU in the field shortly after The “Mothers Day Hill” series of firefights. I remained as company commander for all Battalion operations in southern I Corps, operations west of Tam Ky and west of Chu Lai thru Operation Wheeler. Capt. Julius Johnson assumed command of ABU in Nov. “67.
I returned to the States and was assigned to the US ARMY Mountain Ranger Camp as a Lane Instructor and Opns officer.

I left active duty service in 1969. I married and raised a family in Atlanta, GA since then, and have worked as a financial adviser also selling investment and insurance products. Past and present community activities include Boy Scout leadership at troop, district and council level; active political participation; Red Cross Disaster Volunteer, and President (currently) of The Atlanta Vietnam Veterans Business Association (AVVBA).
Welcome Home fellow warriors!

Pete passed away on July 26th 2003
Pete is now in the warm embrace of God and in the angels care.

“Whenever there was a hurricane or an earthquake in Turkey, he would get together volunteers, load up the trucks, send them out, empty the warehouse and then restock it and do it all over again.” Nancy Brockway, director of Disaster Services, Atlanta Red Cross, on Peter Mitchell, 63 who was a Red Cross worker.

Robert Mitchell and Lori Kelleher recall their father, Peter Mitchell, who died Saturday. A Vietnam Veteran and Red Cross worker, Mr. Mitchell was always there to help, those who knew him said.

Staff photo by Damien A. Guarnieri 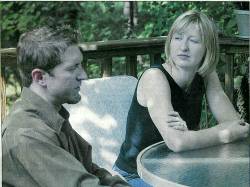 A Life of Service
Peter Mitchell, 63 went above and beyond to help others
By Matt Schafer
Marietta Daily Journal Staff Writer

East Cobb- From the Vietnam War onward, there was always someone Peter Mitchell could help, and there was never enough time to help them all.

“It was just in the past few years when he could sit out on the porch with a glass of wine and feel that his day was done,” his wife, Ellen Mitchell, said. “It was like there was peace.”

Mr. Mitchell, 63, of East Cobb collapsed Saturday after dancing with his wife, a sudden end to a life spent helping others.

He was a Vietnam veteran and manager of the Red Cross Disaster Field Service Center in Fort Gillem who volunteered countless hours helping anyone who needed it. Director of Disaster Services at Atlanta’s Red Cross Nancy Brockway said Mr. Mitchell was often 40 hours a week at their massive warehouse.

“Whenever there was a hurricane or an earthquake in Turkey, he would get together volunteers, load up the trucks, send them out, empty the warehouse and then restock it and do it all over again,’ she said. “You’d see Pete driving around the forklift himself, rearranging or restocking supplies.

Mr. Mitchell was an active member of the Red Cross Disaster Action Team and responded to countless emergencies with boundless energy and helping hands.

“Every day was like an adventure, it really was, “Mrs. Mitchell said. “You never knew what would happen. He might have something planned and the Red Cross would call, and he’d run off and do something different.”

He traveled to Florida for Hurricane Andrew, South Carolina for Hugo and New York after Sept. 11, 2001.

“He managed a service center at 9/11,” Ms. Brockway said. “He provided support for people trapped at the airport, and then if that wasn’t enough, he went to New York and supported people up there.”

In New York, he served meals to weary rescue workers as they picked through the rubble of the World Trade Center.

Although he was called away from home often, his son Robert Mitchell said he never missed an important date.

“Despite his activity, he was there for everything, if not running it, whether you wanted him there or not,” he said.

Mr. Mitchell was also the first Red Cross Volunteer to respond on a Tuesday evening in November 1988 when a Navy A- 7E Corsair slammed into a Smyrna apartment complex.

Mr. Mitchell was awarded a host of medals, including the Silver Star, Air Medal with Oak Leaf Cluster and the rare Vietnam Cross of Gallantry with Oak Leaf Cluster. After he moved to Cobb County in 1969 after leaving the service, he threw himself into politics and community service.

“When people started coming back from Vietnam, they either didn’t do anything with their lives or they did something really special,” said Donna Rowe, a friend and former Army nurse. “They didn’t all go on and be politicians or things like that, but they really did a lot for their community, and that’s Pete.”

The Mitchell house had an open-door policy on holidays and weekday meals.

An ardent Republican, he opened his east Cobb home for political fund-raisers.

Mitchell supported U.S. Rep. Johnny Isakson (R-east Cobb) in every campaign he ever ran in.

“Pete was a tireless volunteer in my campaigns for public office throughout the years,” Isakson said. “I was blessed to have him as a supporter and will miss him dearly.”

In spite of all he did, Mr. Mitchell never got to accomplish it all. He wanted to go to law school and become a lawyer. He wanted to write an autobiography that will now be unwritten.

“It was really interesting to watch his transformation from a young man,” Mrs. Kelleher said. “In your life you have bits and pieces that’ you thought you would accomplish, and somehow you just find a peace.”

Three year”s ago, he found a small bit of peace when he married Ellen, after losing his first wife in 1998.

“Despite their age, they were like two 16-year-olds together,” Robert Mitchell said. “We would find them kissing in the kitchen. They just understood each other.”

She helped bring a renewed purpose back into his life.

“We were both widows, and it was like it was just meant to be,” she said. “He as my soulmate.”

“That was the way he led life. If you were a true Christian person, you do without, and that was just a natural thing, you just walk walk and talk the talk.”