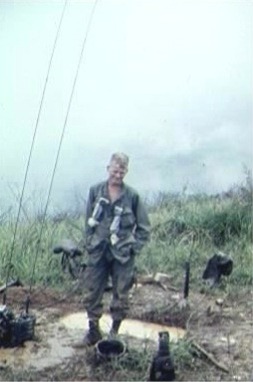 SP4 Luedke on radio watch. The foxhole behind him is full of rain water. We were in the Highlands in I Corps a few weeks before TET ’68 got underway. These pictures were taken in November, 1967. McVay and I (R.G. Nichols) were both wounded on Feb 24th, 1968 between Hue and Hue-Phu Bai and med evaced out to Japan and then the US eventually. It was the rainy season and we were trying to dry out at little while taking a short chow break on a jungle mountain top in these pictures.

Lieutenant General (Retired) Miller joined Oracle Corporation in September 1997 upon retirement from the US Army. He is a Vice President for Oracle’s Government Operations with responsibility for the following business sectors: Department of Defense, Aero Space and Defense Industries, and State and Local Governments (Midwest). He serves on Oracle’s Homeland Security Task Force, Network Centric Operations Task Force and their Training Task Force. He is the Chair of the Board on Army Science and Technology, National Research Council of the National Academies and is Vice President of the Army Distaff Foundation. General Miller has done Independent Technology Review’s in the areas of Leader Development, Future Combat System, and Command and Control for the US Army. He retired from the US Army on August 31, 1997 after over 34 years active service. His offices are in Reston, VA.

Prior to his retirement, Lieutenant General Miller spent most of his career in commanding line units, developing battle command concepts and requirements, and in teaching, training and leading soldiers and officers in a variety of assignments. The highlite of his line command assignments was serving as Commanding General of the 101st Airborne (Air Assault) Division and Ft. Campbell, KY. He served as Deputy Commanding General (Futures), TRADOC from July 1995 until his retirement. Prior to that he served as the Commandant of the US Army’s Command and General Staff College and Commander of the US Army’s Combined Arms Center (CAC) which included the Army’s Battle Command Battle Laboratory and supervision 11 other Army Schools that provide training and education for younger Commissioned Officers and Non-Commissioned Officers. General Miller had served at the Staff College in previous assignments as the Deputy Commandant (Dean), as a member of the graduate school faculty and as an author and instructor. Earlier key assignments include; Assistant Division Commander (Maneuver), 8th Infantry Division; Commander, 1st Brigade, and Chief of Staff, 9th Infantry Division (Motorized), Fort Lewis, Washington and Commander of the 2-22d Infantry (Mech) Battalion in Wiesbaden, Germany. His assignements in the field of Operations Research include Author/Instructor, Wargaming, USACGSC; Chief, Program Coordination Team, Deputy Chief of Staff Research, Development and Acquisition, DA and as Assistant Deputy Chief of Staff for Combat Developments, HQ TRADOC.