I was born in Oakland, California and raised in San Leandro, California. In early 1968 I learned that “full-time student” was 12 or more quarter units. I also heard that prior to swearing in draftees, they counted off by three’s. All the three’s went to Camp Pendleton. Recruiters often get a bad rap but mine talked me out of becoming medic. MP was out of the question due to my glasses. That left me with cooking, repairs, or supply. I choose supply.

Top Barker (the best First Sergeant I ever had) offered me OJT as a 11B for about a month on Hwy One and two Fire Bases. For the rest of my tour I worked in Co. B, 1/327th’s supply room. I think the company clerk (Barber) and I were the only non-infantrymen in the rear.

I remember the company taking the most loses when they went into the Ashau. Lowlands were the safest. David Neff’s accidental death, days before his DEROS, is often on my mind. I DEROS’ed in February of 1970.

I guess I experienced some “Final Act Behavior” while serving out my last 18 months in Aberdeen Proving Grounds. I volunteered to finish up my enlistment with Co B and was back in-country by September of 1970. The company had experienced some heavy casualties before I got back but I only remember humbugs after I returned. Alpha Company’s misdirected artillery strike on Christmas Eve ’70 sticks with me.

I returned to the real world in August of ’71 and was discharged a day later. I used up as much of my GI Bill as I could.

I married and helped raise one step-child who’s thirty now. We’re still working on our own, he’s fifteen. I did 27 years with the local Sheriff’s Office and retired July of ’03. My lovely wife Karol beat me to retirement by six years and deserves a lot of credit for allowing me to hang out with her most all day long. 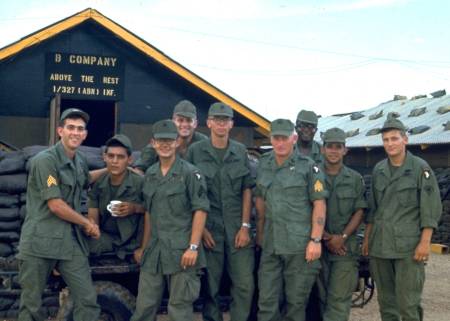 Back to the Troopers
Product added to cart