Enlisted in the Army in January 1946 at the age of seventeen. After basic training, I went to Germany on occupation duty with Co. B, 16th Inf. Regt, 1st Infantry Division. I returned to CONUS in 1949 and had a break in service. In October 1949, I re-enlisted and served with various units, until 1951, when I volunteered for the Airborne Ranger Companies. I remained in the Ranger Training Command, with the 7th Ranger Co (Abn) until deactivation of the Ranger Companies in August 1951.

I remained with C, 1/327 until March 1966. I then went to MACV and was assigned as an advisor to the RVN 37th Ranger BN. I returned to CONUS in September 1966 and rejoined the 101st Abn Division. I was initially assigned to HHC 2/501 as Recon Platoon Sgt, and upon promotion to E-8, I was assigned to A 2/501 as First Sergeant and deployed with the unit to Vietnam in December 1967. I remained with A 2/501 until March 1969. In March 1969 I extended my tour and was assigned as an advisor to the Vietnamese Airborne Division. I remained in this assignment until my retirement in Vietnam in February 1973. I remained in Vietnam as a civilian until November 1974.

In 1974 I went to Singapore and was employed by a company named Offshore Navigation Inc. The company provided navigation for offshore oil survey, positioning of offshore oil rigs, etc. I lived and worked out of Singapore until 1984. I returned to CONUS in 1984 and continued to work for ONI. I worked in the following countries: Argentina, Australia, Burma, Greece, Indonesia, Japan, Malaysia, East Malaysia, Morocco, New Guinea, New Zealand, Pakistan, Taiwan, Thailand and a few countries in the Persian Gulf.

I worked as Property Manager for a Real Estate firm from 1990 to 1995, and then went into full retirement. 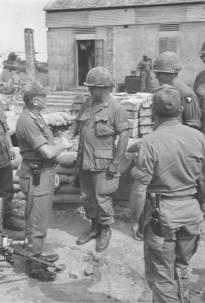 Group picture taken in March 1968, when Fred was a First Sergeant of A, 2/501 General Abrams is on left awarding a Purple Heart to Fred, also in photo are MG Barsanti, CG 101st Abn Div and Col John Cushman, CO 2nd Brigade.